I took this picture a few weeks ago on Thursday (and put a blur effect on it) and for some reason it looks like it’s the dead of Winter. What is up with the bare trees on the side?! Lol! There’s fluffy green ones that appear to be quite fruitful,  in the back but what about those ones?! The barren ones.  I burst out laughing when I saw them! It’s the dog days of Summer! Then my mom who was also laughing (she can be easily amused like me, just not as much usually), showed me the same kind of dead looking trees across the street! I don’t recall ever seeing bare trees like this in Summer before. Maybe they were always there but I just wasn’t paying attention(how unfortunate!). I know in April there’s a mixture of bare and blooming trees because Winter is still just ending and Spring is beginning. But it’s July!

Anyway, I was recently thinking about how almost nothing (some people would say absolutely nothing) exists inherently. It’s all about our perception or perspective. Two people can look at the very same thing and one sees something completely different. In fact, one person can look at something one moment then later look at that same thing but view it differently even when the thing hasn’t changed.

The weather for example, some people view dreary, rainy days as miserable while someone else is inspired and thrilled. One person can be thrilled about hot, humid days while others find them to be disgusting. Also, just look at the reviews for books, hundreds of people say it’s amazing then hundreds more say the same book sucks. It’s the same exact book! This just goes to show it’s all about how we view things. Is one person really right and one wrong? Or when I view something one way then my perception changes about that same thing later, was I right then or now? 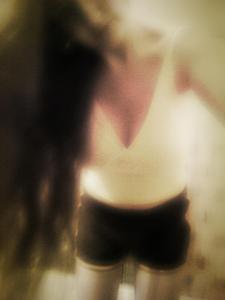 In my daily book of positive quotations, I found this quote:

“A weed is no more than a flower in disguise.” ~ James Lowell

It reminds me to try to change my perspective when I’m struggling with depression. I’m generally very positive, even when I’m depressed, I often find things to see beauty in. But when I’m severely depressed, it is so hard to see life as a whole, in a positive way. I still see specific  beautiful things around me but ultimately I’m hopeless or so stuck in a very negative state.

I noticed that some of the things that I view as positive or neutral when I’m not depressed, suddenly become very negative to me when I am depressed.

When depression hits me, every little thing is easy to interpret as negative. If someone looks at me when I’m depressed, I can take it as a bad thing, like that person thinking something negative, even if the person compliments me, I can misinterpret it as being mocked instead of sincere, if someone I know walks by me and doesn’t say hello, I can automatically take it very personally and negatively, where if this happens when I’m not depressed, I don’t really care why the person did this or can think maybe the person did not see me or did not want to talk to anyone. When I’m depressed, I often think of all the negative things people ever did to me or said to me, even years ago. As soon as my depression lifts, I no longer care and even realize that some of those things weren’t even negative.

There are days I am so thankful and think this life is a beautiful one, I have a house to live in, good health, a couple of friends, a family, a job, my senses….and the very next day or even the same day, I become depressed and feel that it is a terrible one, I live in a house but it’s not my own, I live with my mom, dad, and sister and feel that I’m not acting as a responsible adult, I have a job but not a “real” one, my health isn’t as good as it can be, I don’t have many friends, my family isn’t perfect….when my life is no different that day than the day before when it was absolutely beautiful! Nothing changed but my perspective.

It’s all about perspective.

Noticing this about myself, often helps me significantly when I slip into a depressive episode. I remind myself that this negative sensitivity to everything around me is only because of my condition. It’s an illusion. It won’t make my depression go away but it can help me cope and make it so my depression doesn’t get even worse by dwelling on the negative. I keep making it a point to change my views and my thoughts into more positive ones and remind myself how just recently, I viewed these very same things very positively.

This can also help people who aren’t depressed or don’t have depression ever.  It doesn’t take just depression for us to sometimes view things negatively and feel completely low.
Sometimes we can think our friend or lover or relationship or job is perfect or amazing then later see all the ways they can be better. Our mood can affect our perspective.

Our situation can be exactly the same today as it was yesterday but we can see it in a very different way. It’s actually quite fascinating!

Even if something was always bad or we always viewed it that way, we can still try to view the situation more positively. Maybe it’s teaching us something or it’s necessary to get to something better. If we can’t change it, let’s change our attitude.

One way I found to help this is to intentionally focus on the positive in the people and things around us and remind our self that maybe it’s only our mood clouding our perception anyway. Make it a point to look for the good in everything and tolerate or accept the bad when we can’t distance our self.

I was browsing songs on YouTube and came across the song “No Scrubz” by TLC.

I think it’s kind of rude.

She criticizes him for thinking he’s “fine” or something like that, for trying to get with her while hanging in his best friend’s car, for living with his mom, for looking like trash, while she’s looking classy, for being a broke ass (lol), for talking about all that he wants while having no money…

When I first listened to this song recently, after not hearing it in years, I automatically saw the good in this “scrub.” He doesn’t have money but he does have a best friend and a mom and his mom allows him to live with her. That’s better than money! Best friends and moms are the best to have! Who cares about money! Lol And it’s clear in the song that he does have a phone number, whether his or his mom’s or someone else’s, he has access to phone service!
Also, while it’s not really respectable to be yelling to girls while driving by, he’s complimenting her for being pretty, that’s better than saying someone looks like trash.
I would prefer a scrub to be yelling out at me about how pretty I am than an abusive person telling me I look like trash(not everyone who calls someone trash is abusive, imo).
Some people appear to be respectable, have money, a job, a great house, education…but act in an abusive or cruel way or just not very pleasant.
I will take the scrub any day! Lol
He’s saying something good about her! I would prefer someone being kind of trashy than someone acting incredibly stuck up calling people trash. And at least he has things he wants. He may not act on it but at least he’s not dead, he has desire. That itself counts for something. I am especially aware of this because when I’m very depressed, I often have no desire and am numb and lifeless. So when someone or me has passion or desire or hunger, I am inspired.

Again, I see the difference in perspective. Two people can look at one person or thing and see them in a completely contrasting way.

She sees a complete loser while I think he’s not so bad. And this isn’t to bash her or the song. I can’t deny that the song is funny and has good music and a sweet tune. And she certainly has good things about her too! She can sing well! She can dance! She likely won’t get into a car with a stranger. That’s good! She clearly has a high opinion of herself. That is very good. It’s not good to be stuck up but a woman with confidence is sexy. Maybe she can tone it down a bit in one way but it’s ultimately a good attitude to have. She has all these good things about her. And many other things. She’s pretty also. She’s pleasing to look at.

I chose this song as an example because I have been listening to it recently and it happens to be a good example for this topic. It’s just random or coincidental.

And I, myself have had low opinions of some men yelling at me while driving, not all but some, especially when they follow me and try to block me and don’t take no for an answer.

But I want to encourage us all to attempt to have a positive perspective often. It doesn’t mean we have to like and accept everything and everyone but it doesn’t hurt to notice the good, even in people and things we don’t like. It’s a great habit to develop or strengthen. 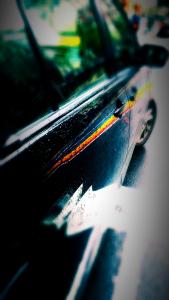 If we look closely enough, we can always find a splash of color even in the grayest, darkest, bluriest places.