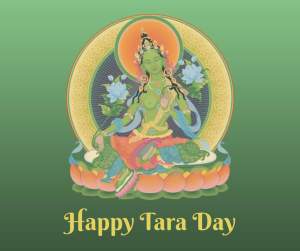 (Green Tara – not my photo)
“There is a true feminist movement in Buddhism that relates to the goddess Tārā. Following her cultivation of bodhicitta, the bodhisattva’s motivation, she looked upon the situation of those striving towards full awakening and she felt that there were too few people who attained Buddhahood as women. So she vowed, ‘I have developed bodhicitta as a woman. For all my lifetimes along the path I vow to be born as a woman, and in my final lifetime when I attain Buddhahood, then, too, I will be a woman.'”
~Dalai Lama, 1989

Tara is the female Buddha of love and compassion. She represents Perfected Wisdom.

This is the mantra for Tara. It appeals to longevity, merit, and wisdom.

It may be easier to understand at first if you read the mantra while listening. 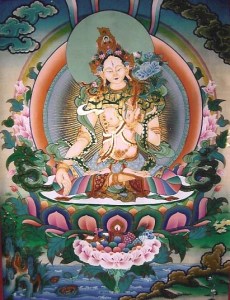 (White Tara – not my photo)

Green Tara is said to help people with immediate and worldly concerns such as wealth while White Tara responds to problems relating to emotional and physical health. She is associated with health and beauty. Her love is said to be so powerful, it can cure diseases.

Also, check out these beautiful  legends.

How inspiring these myths are! We can look to this beauty, Tara, in both her White & Green forms, for inspiration. We can channel our inner Tara to be more compassionate to others and be more loving in everything that we do.
When we chant her mantra, we can summon all the love and goodwill and strength we have within, bringing it to the surface of our mind to be more conscious of it.

Here is me channeling my inner White & Green Tara! 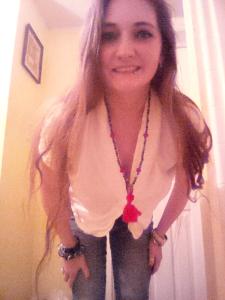 There are 21 praises of Tara. Here are some of my favorite ones.

1
Homage to Tara swift and fearless
With eyes like a flash of lightning
Lotus-born in an ocean of tears
Of Chenresig, three worlds’ protector.

2
Homage to you whose face is like
One hundred autumn moons gathered
And blazes with the dazzling light
Of a thousand constellations.

3
Homage to you born from a gold-blue lotus
Hands adorned with lotus flowers
Essence of giving, effort and ethics,
Patience, concentration and wisdom.

9
Homage to you beautifully adorned
By the Three Jewels’ gesture at your heart.
Your wheel shines in all directions
With a whirling mass of light.

10
Homage to you, radiant and joyful
Whose crown emits a garland of light.
You, by the laughter of TUTTARA
Conquer demons and lords of the world.

12
Homage to you with crescent moon crown
All your adornments dazzling bright.
From your hair-knot, Amitabha
Shines eternal with great beams of light.

15
Homage to the blissful, virtuous, peaceful one
Object of practice, nirvana’s peace
Perfectly endowed with SOHA and OM
Overcoming all the great evils.

16
Homage to you with joyous retinue
You subdue fully all enemies’ forms
The ten-letter mantra adorns your heart
And your knowledge-HUM brings liberation.

18
Homage to you who holds in your hand
A moon like a celestial lake
Saying TARA twice and the letter PEY
You dispel all poisons without exception.

19
Homage to you on whom the kings of gods,
The gods themselves and all spirits rely.
Your armor radiates joy to all
You soothe conflicts and nightmares as well.

21
Homage to you, adorned with three natures
Perfectly endowed with peaceful strength
You destroy demons, zombies and yakshas
O TURE, most exalted and sublime!

They are all beautiful but here are just some.

You can find all 21 and other information about our Tara here!

I hope to one day receive a Tara Empowerment at the Buddhist center. I received the one for Avalokitesvara, the masculine version of Tara.

So, in honor of Tara and Tara Day, which is the 8th day of each month, here’s this post! Sometimes I attend the chanting ceremonies at the center. They are beautiful and inspiring. We chant together to Tara to generate positive energy and receive her love & wisdom into our own minds. Even if you aren’t a Buddhist, it’s an inspiring way to open your mind to greater love for all and just as a state of being. It’s a great ritual to develop inner strength and deepen our wisdom. Tara symbolizes great love & beauty and equality which is good for anyone. Tara is to remind us that a woman can do many things as well as a man can and we can do this while cherishing our feminine nature.

“For all my lifetimes along the path I vow to be born as a woman, and in my final lifetime when I attain Buddhahood, then, too, I will be a woman.”

Much love to you, 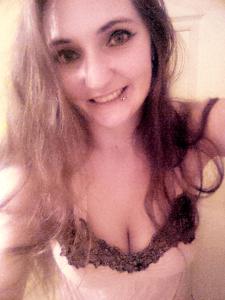 “Well, I woke up one morning,
flossed my teeth and decided,
“Damn, I’m fierce!” You look good!
You can be just like me! A goddess? Yeah!
Don’t just pussyfoot around and sit on your assets.
Unleash your ferocity upon an unsuspecting world.
Rise up and repeat after me: ‘I’m beautiful!'”

Day 13 of the 30 day photo challenge is to get a picture of our own self, specifically the face.

I got quite a few pics of me today! August 13th. Here goes: 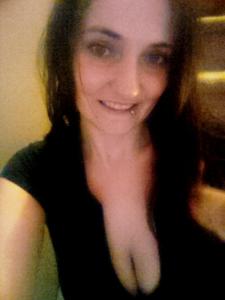 And here’s a few recent ones but not today ones: 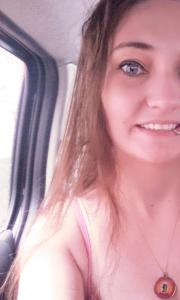 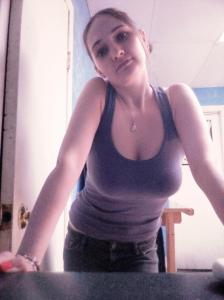 I’m not usually this vain! Although I do love taking pictures of myself! I’m just having super, super fun with this photo challenge, taking new pictures for the topic of the day and going back and finding previous ones! 😀 And today happens to be photo of the self day! lol ❤

And here is a song I love, featuring Bette Midler:

I love this song about celebrating our own and each other's beauty which includes physical beauty. There's nothing wrong with appreciating the physical beauty of a woman, including our own. It's fantastic to celebrate!

We're often made to feel that physical beauty is wrong to celebrate, that it's shallow or stuck up or wrong to others who may not feel as beautiful. But it's not shallow or objectification  unless that's all we see and care about and it's not stuck up unless we act like we are better than others. And loving our own selves, expressing our appreciation for our own beauty in a truly loving way can inspire others to do the same with their own beauty.

The most important beauty, in my opinion, is within. But that doesn't mean we should not also cherish the physical.

Also, non physical beauty comes in various forms, tender and quiet, fierce and assertive, loud and bold, simple and laid back, bitchy or syrupy sweet, inquisitive or just going with the flow, badass or gentle, witty and funny or thoughtful and warm, motivated or not…or a combination of all of these things. Let's embrace all that we are while encouraging, accepting, and building up others.

Let's celebrate our own and each other's inner & outer beauty! ❤

I love how in the song she acknowledges her own beauty & strength while encouraging others to do the same. Confidence is sexy and it's even sexier when it's humble enough to allow other people to be just what they are and seeing beauty in it.

And in this song, they make it clear that we are not “too” anything. We are perfect how we are.

And it's our responsibility to live how we want to live and maintain our own happiness no matter what other people say, do, or think.

It's one of those “feel good” songs it's almost impossible to hear or read the lyrics and not be inspired and uplifted. It's a combination of inspiring, upbeat, and funny. They encourage us to feel beautiful and not just feel it but scream it off the rooftops! 😀

(many years ago at work, my coworker, who was struggling with body image issues, said this. She came to work wearing tight, revealing clothing and decided to say to hell with society's definition of beautiful and sexy, just be what you are and flaunt it! It inspires me ever since. <3)

Check out the 30 days photo challenge!

“I know who I am. I am not perfect. I’m not the most beautiful woman in the world. But I’m one of them.” ~ Mary J. Blige

Much love to you,